Metal expansion joints (also called compensators) are compensating elements for thermal expansion and relative movement in pipelines, containers and machines. They consist of one or more metal bellows, connectors at both ends, and tie rods that depend on the application. They are differentiated according to the three basic types of movement: axial, angular and lateral expansion joints. Expansion joints have usage in various sectors, like energy productions, paper industry, chemical industry, water treatment, oil and gas. Everywhere where exist pipelines and occurs thermal movements or vibration, then expansion joints can be used. Pentamet is producer of expansion joints of all kinds for more than 20 years.

Emil Witzenmann was considered the inventor of expansion joints.

However, records now show that a factory was Founding of Henri Ehrmann & Co. a factory for metal cartridges in Karlsruhe / Germany in 1872. In 1898 A patent was applied for “flexible metal tubes with beading folds” (convolutions), Production of bellows and metal hoses of seamless corrugated tubes for industrial applications, was therefore first ever manufacturer by, the company now known as, The BOA Group. 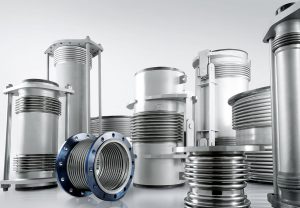 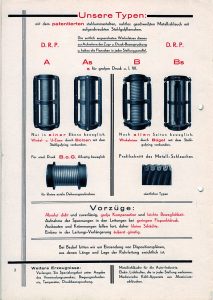 In modern expansion joints, the metal bellows are often produced with a so-called multi-ply design. To increase both flexibility and stability, multiple thin plies of metal are layered to form the bellows walls. There are two basic design types: The multi-ply and the multi-walled bellows structure. The multi-ply structure consists of a pressure-tight, longitudinally welded outer and inner cylinder of stainless steel. In between these cylinders is an open, spiral cylinder which forms multiple plies depending on the design. The multi-walled structure consists of several concentric, longitudinally welded cylinders. Each cylinder forms a pressure-tight and closed “wall”.

The main advantages of multi-walled bellows: 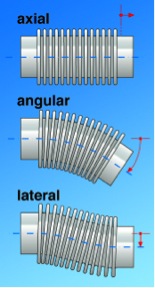 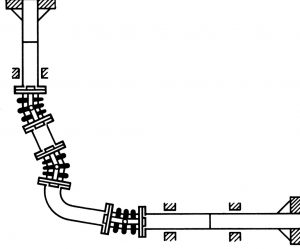 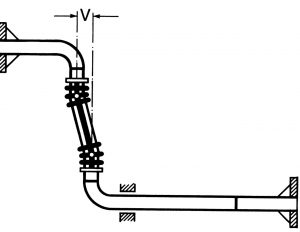 The compensation type that is selected depends on which method is the most cost-effective and which provides the best solution for the function that needs to be fulfilled. An economic consideration should not merely take into account the cost of the expansion joints themselves, but should also include the required anchors, pipe supports and shaft structures

The angular expansion joint absorbs bending and angular movement. Like a simple axial expansion joint, it consists of a metal bellows and connectors on both sides. It also features

Thus, the anchoring determines the type of movement absorption.

The lateral expansion joint absorbs transverse and lateral movements. It consists of

Normally, the anchoring consists of round anchors on spherical bearings. If high axial compressive forces occur, flat tie rods with pin or universal joints are used. The magnitude of the lateral movement increases with the bending angle of both metal bellows and with the length of the intermediate pipe.